5W40 motor oils are suitable to be used in a variety of climates and are effective for starting engines in temperatures as low as -30°C. These motor oils provide increased protection at start-up, compared to monograde and other entry level viscosity products. A 5W-40 is often synthetic, like QUARTZ 9000 5W40, which means it has additional benefits. These are listed in this post.

There are two important factors to consider when comparing and choosing motor oils — what the manufacturer recommends for your engine (relating to the specifications and viscosities allowed), and what the operation conditions are (such as the temperature and operation of the vehicle). 5W40 motor oils can be used in most conditions and are ideal for starting engines at low temperatures and effective at high engine temperatures. The more synthetic nature of this oil also allows it to maintain and degrade/oxidize less during usage.

What does 5W40 actually mean?

These two numbers in the name signify the performance of the oil under two different conditions, during start-up and when the car is in normal operating condition. The “W” stands for “winter” and the number preceding it indicates the oil’s viscosity (or thickness) at low temperatures (hence the W) when you start the vehicle. The number after the W indicates viscosity at higher temperatures (150oC on average), when the engine is actually running. The higher the second number is, the thicker the oil is at that defined temperature condition.

5W40 motor oil has a winter viscosity grade of 5, meaning it’s less viscous at very low temperatures, compared to for example a 10W40. At low temperatures (during start-up), a lower viscosity oil can move between the moving parts quickly as it flows more easily. This forms a protective oil film faster when the surfaces start to move compared to a monograde. This is an advantage of a multi-grade oil that a monograde (those that only have one number) does not provide.

It also has a hot viscosity grade of 40, which means it is just as viscous as 10W40 at high temperatures, but less viscous than oils such as 15W50. As the temperature increases, the existing protective oil film will become thinner, therefore a higher viscosity oil will provide a thicker protective film.

Why does the viscosity of motor oil matter?

When selecting a particular grade of motor oil, you face a trade-off between fuel usage performance and protection of the engine. An oil that’s more viscous while your engine is running will do a better job of protecting engine components by separating the parts more. But, an oil that’s too thick will also be somewhat of a drag on engine fuel usage as the engine needs to work harder to move the parts. That’s why it’s important to consult your engine manufacturer (or your vehicle manual) about exactly which grade of oil is appropriate. Often, more than one grade of oil could be used, but this you needs to be confirmed by the OEM. 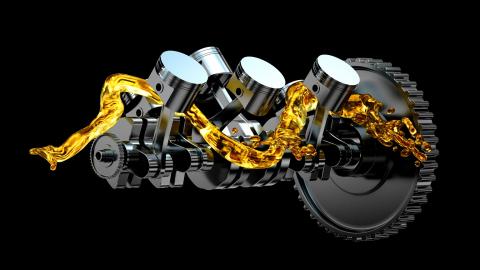 The choice between 5W40 motor oil and an alternative like 10W40 depends on the winter temperature in your region. 5W40 is better for starting your engine at low temperatures as it flows more easily at these temperatures. When the engine is running and hot, 5W40 and 10W40 have high viscosities and are equally effective in protecting against engine wear.

What about oil specifications?

Stick to the minimum OEM specifications required, you can use a product with a better specification if backwards compatible, which is often the case.

Are there other benefits?

Definitely, a 5W40 is often more synthetic in nature than a 10W40. This means the oil does not degrade as quickly when used. This is important because less harmful by-products are formed. These by-products are harmful for engine surfaces.